Whether it be a safety meeting, work order, quote, or inspection process collecting a signature is an important component.

An electronic signature, defined by the Canadian Personal Information Protection and Electronic Documents Act (PIPEDA), is “a signature that consists of one or more letters, characters, numbers or other symbols in digital form incorporated in, attached to or associated with an electronic document”. An electronic signature, defined by the United States Electronic Signatures in Global and National Commerce Act (ESIGN), is “an electronic sound, symbol, or process, attached to or logically associated with a contract or other record and executed or adopted by a person with the intent to sign the record”.

Use of electronic signatures is increasing due to the efficiency provided by technology and can be considered legally binding when collected using a process such as the one described below.

The setup of Signatures is described from the prospective of a safety meeting process.

Aside from tracking the content of the safety meeting, collecting the name, company, and signature of participants combined with the approval and signature of the meeting leader is important for safety compliance.

The first setup step of Signatures is to Show signatures box, which enables the ability to collect the electronic signatures of meeting participants. This is found on the Template tab in the Settings. 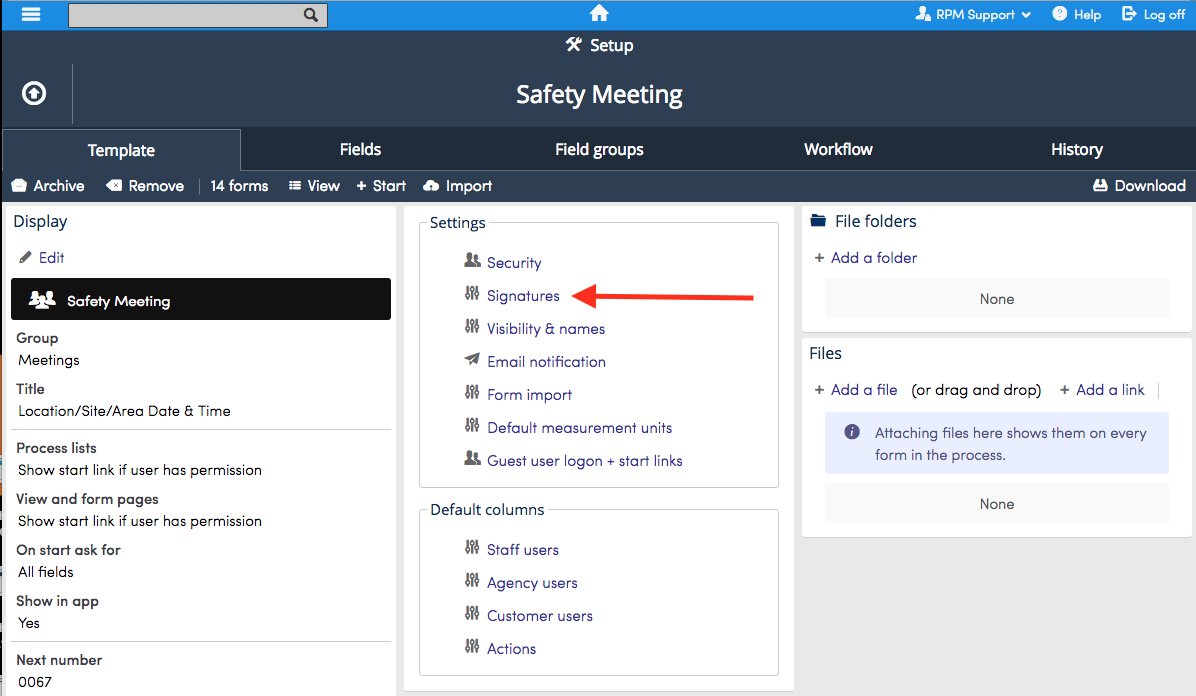 From the Signatures settings page a setup user can: 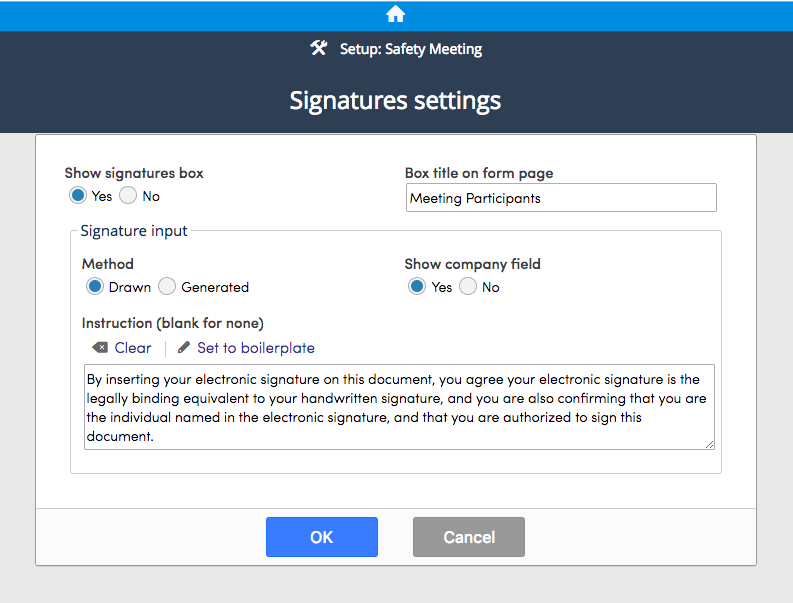 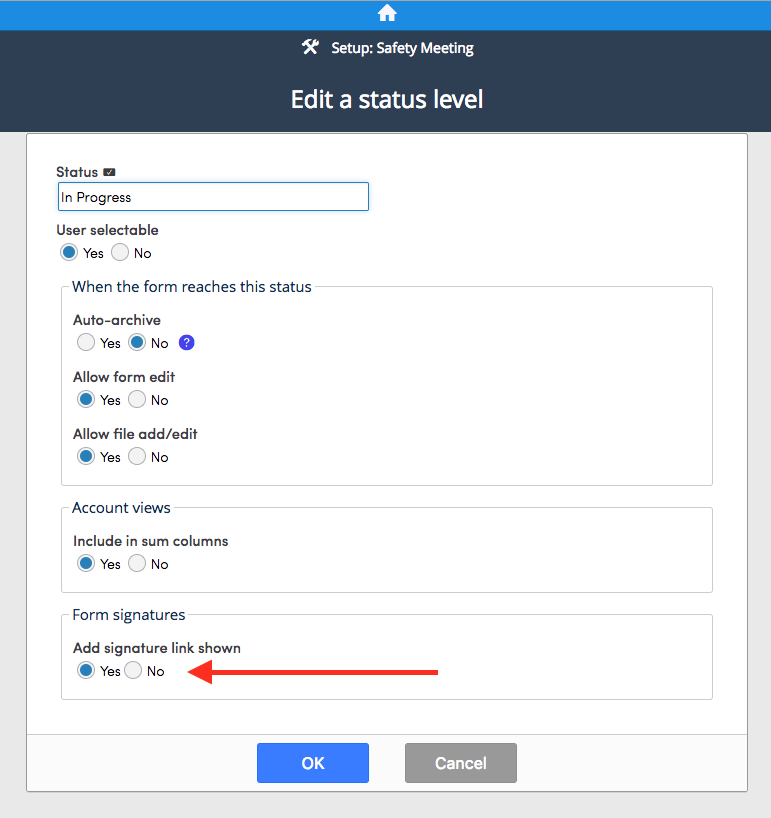 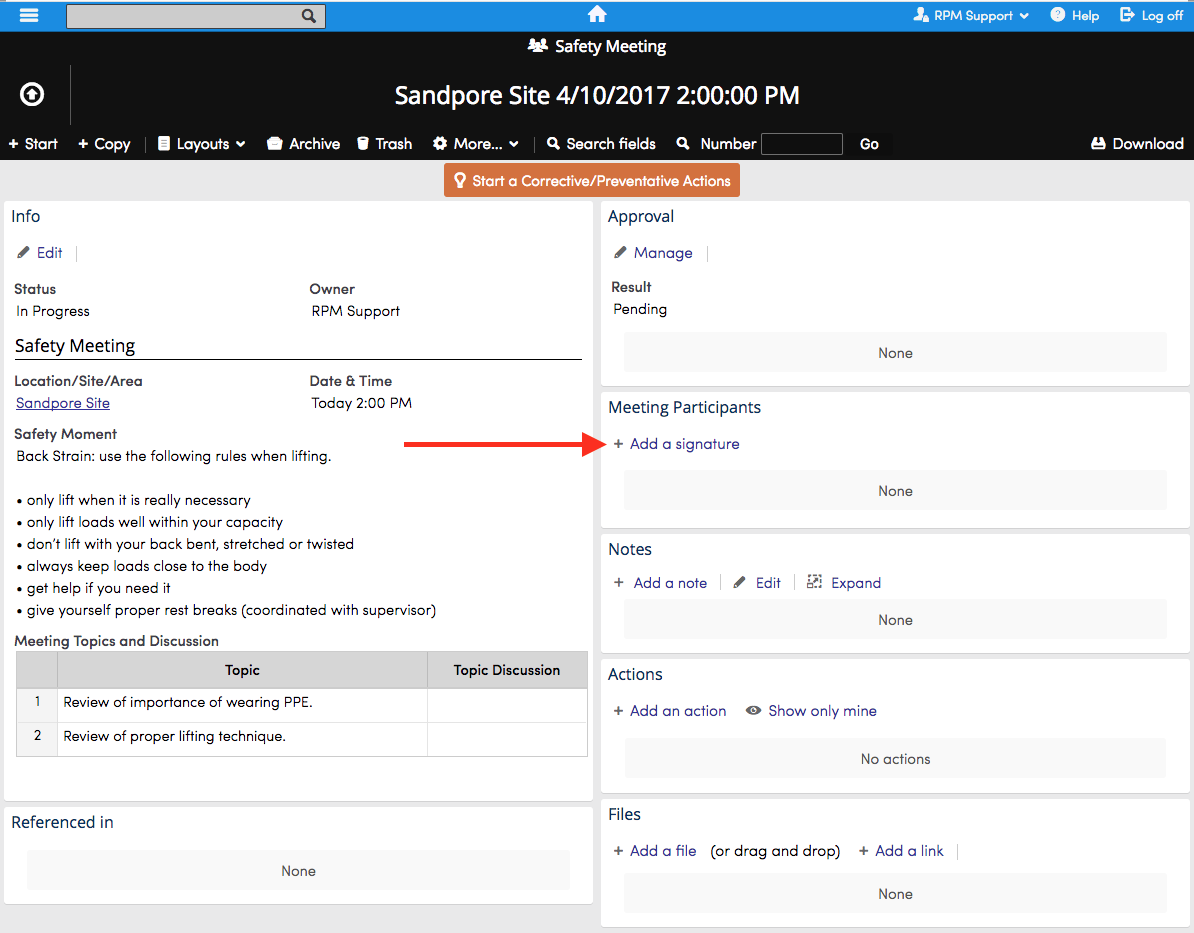 Save time as the mobile device goes around by using Add more to add additional signatures. 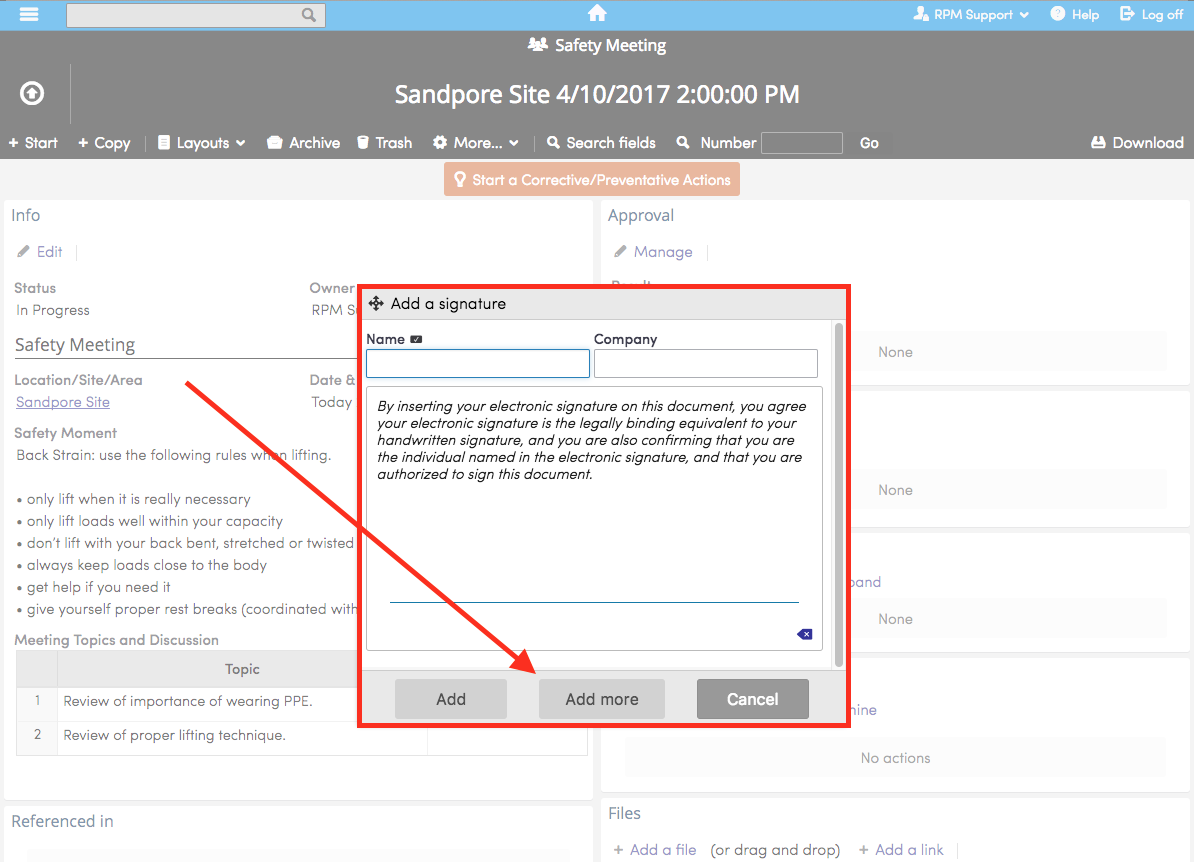 When a user adds their signature, the date and time it was added is automatically captured and displayed. If necessary, the time a user signs a safety meeting form could be audited against potential form edits by examining the form history. 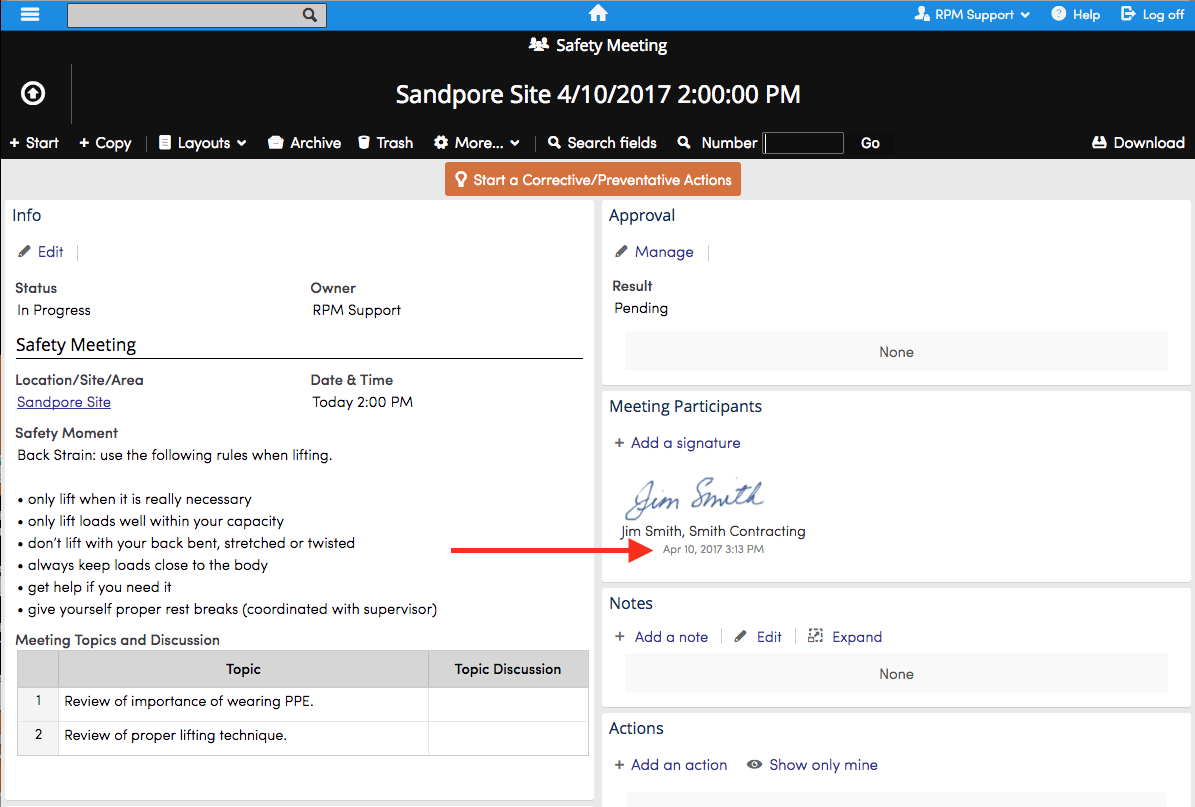 However, it's a best practice that a safety meeting form be locked from editing when collecting signatures. Then, when all signatures have been collected, an Approval is initiated. 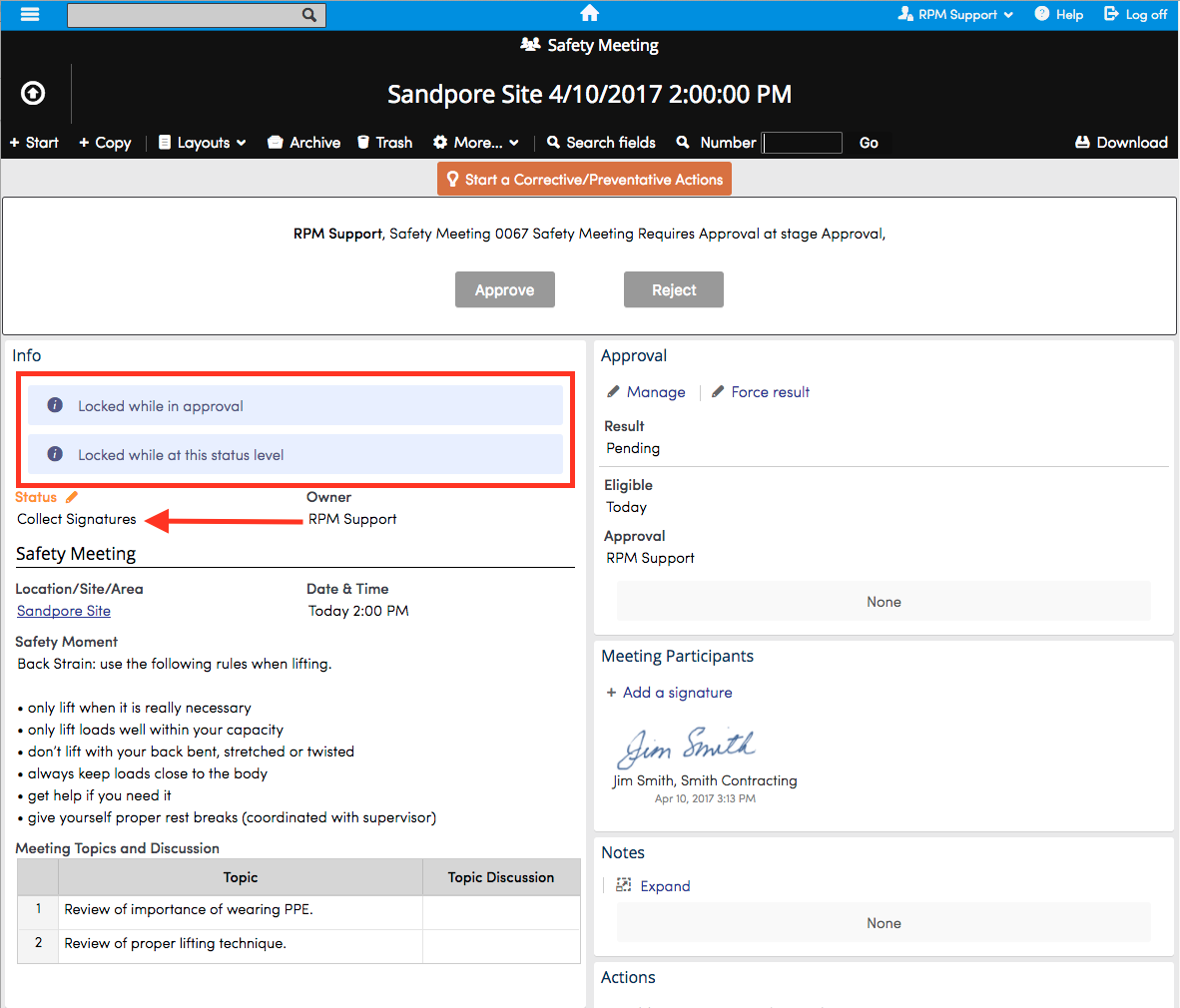 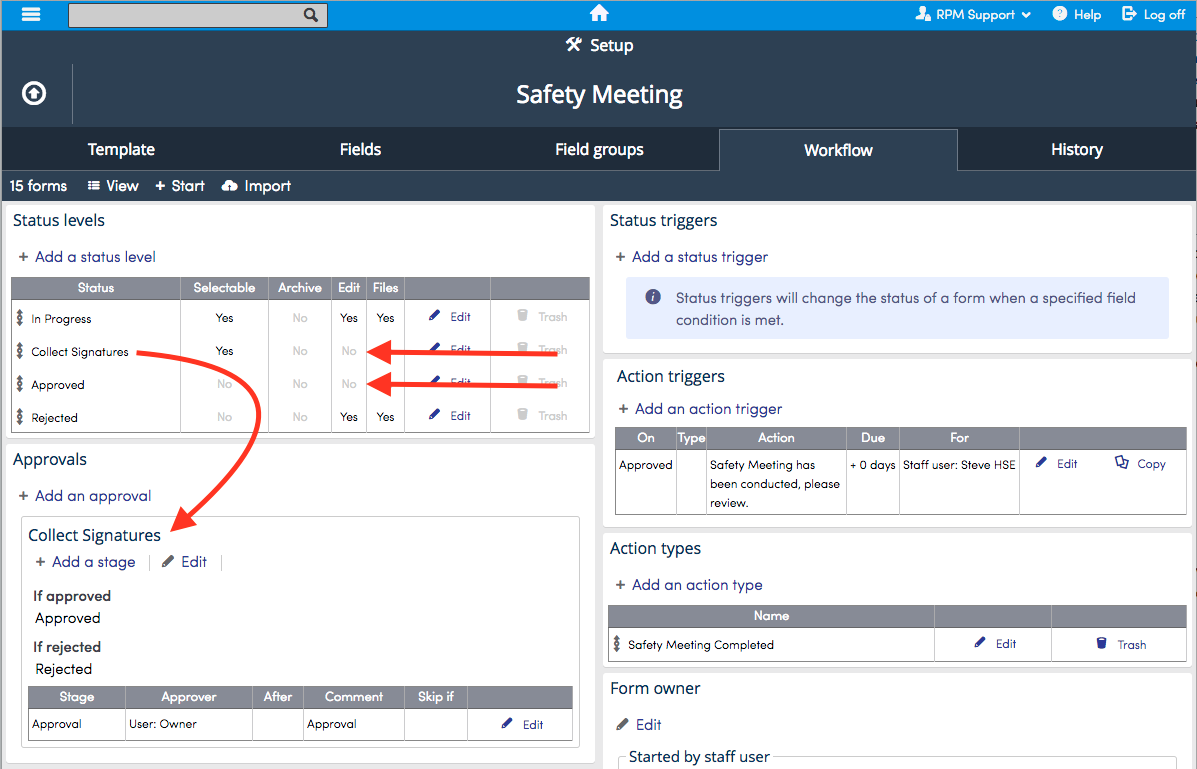 Signatures have been combined with Approvals to create secure electronic signature functionality. Including a signature with an Approval can be done either with a saved signature or by drawing one.

If a user wants to add a saved signature, the first setup step is to logon using a username and password. Then navigate to Users, View their user page, and Add saved signature. 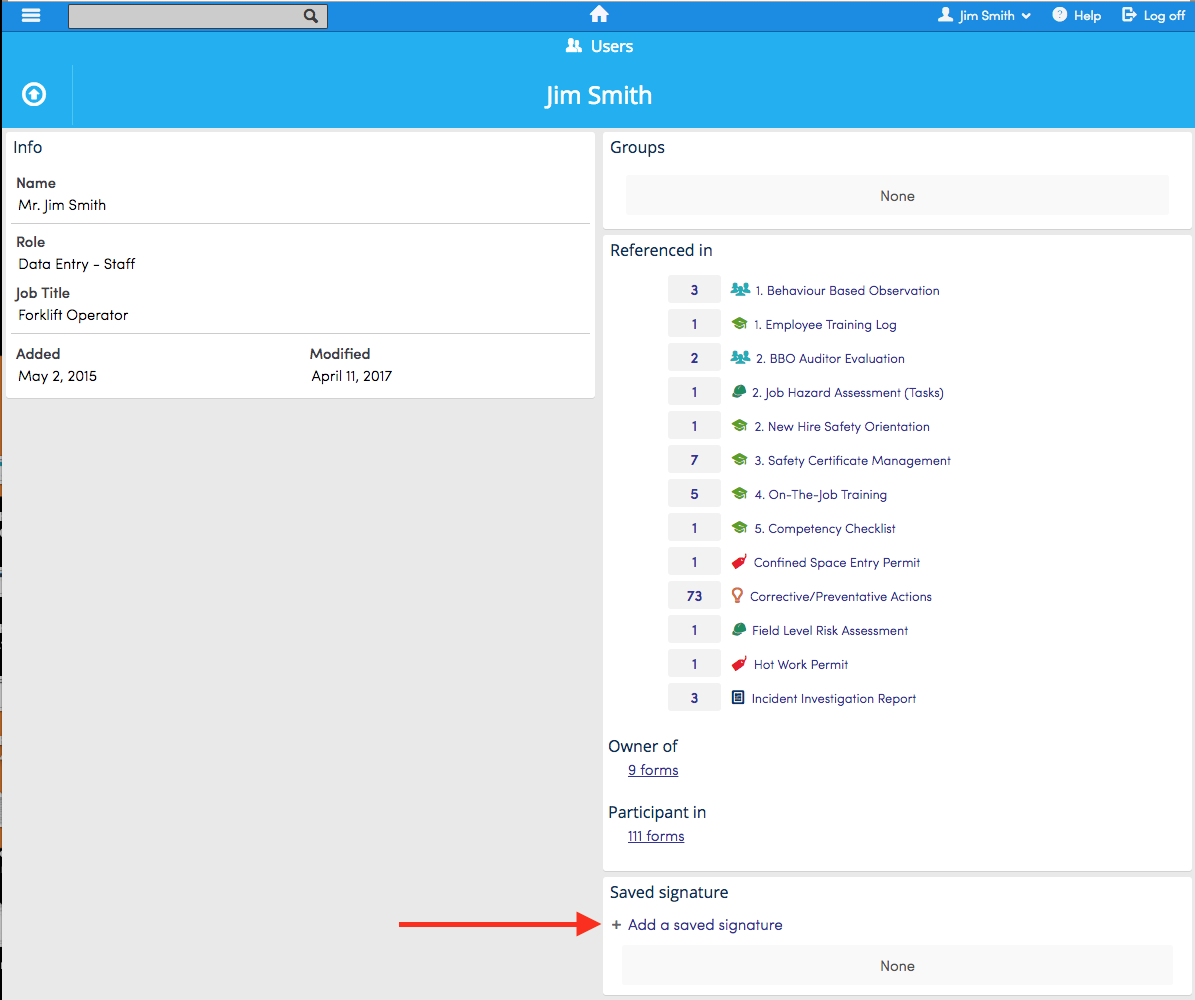 The saved signature can now be used for Approvals.

The next setup step is to configure which Approval Stage(s) you want users to provide a signature for. Edit the appropriate Approval Stage and choose to Require signature on: Approval, Rejection, Any choice, and Never. 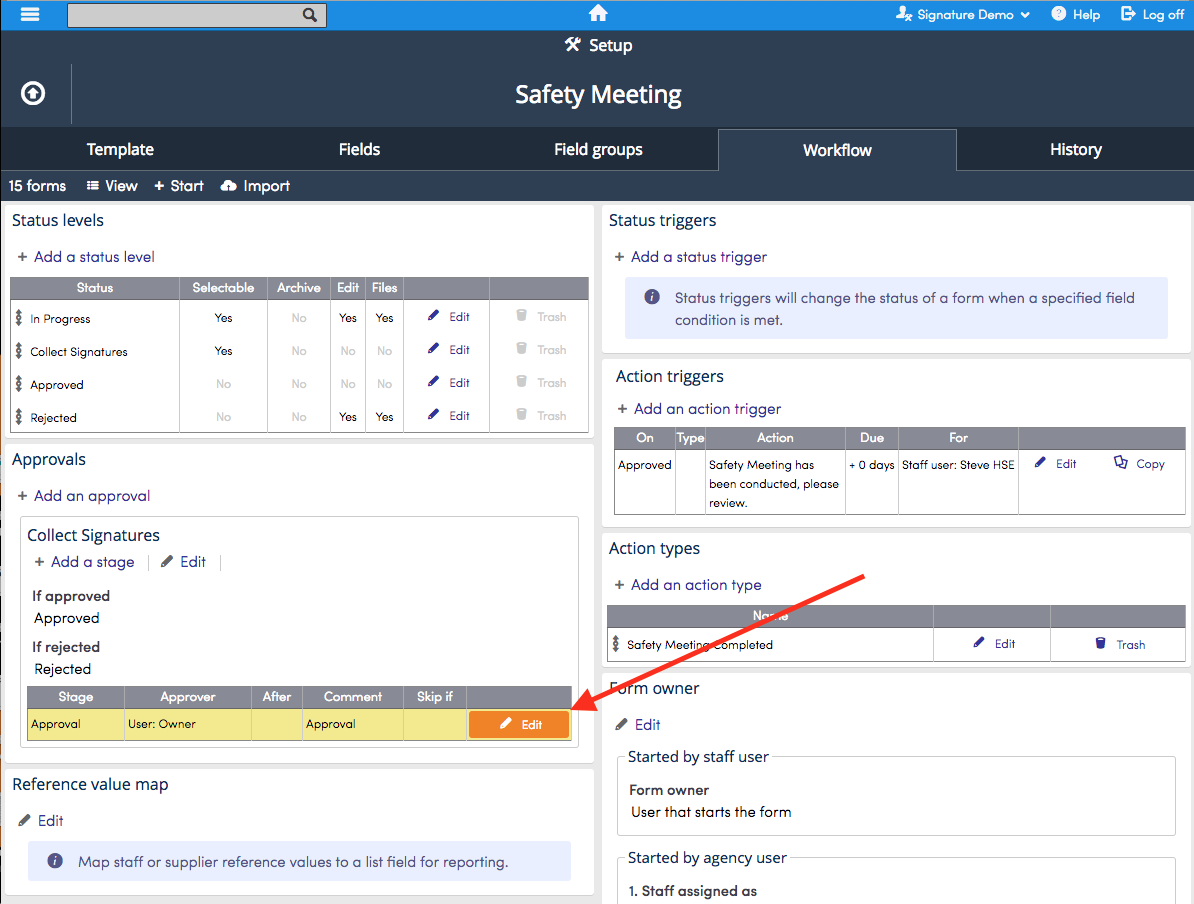 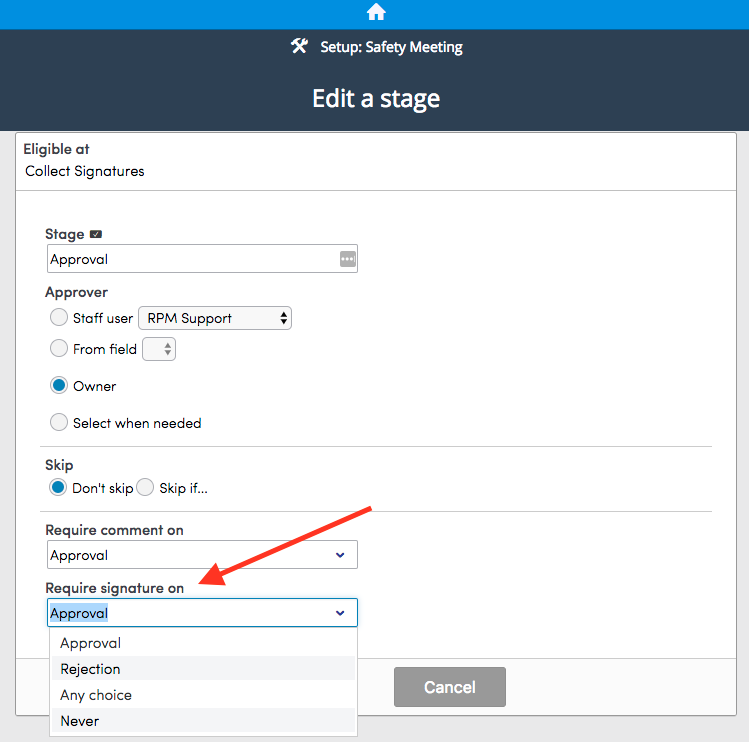 If you configure an Approval Stage to require a signature, the user's Name will automatically be filled in, and the user has the option to Use saved signature (if one has been saved), or draw one. 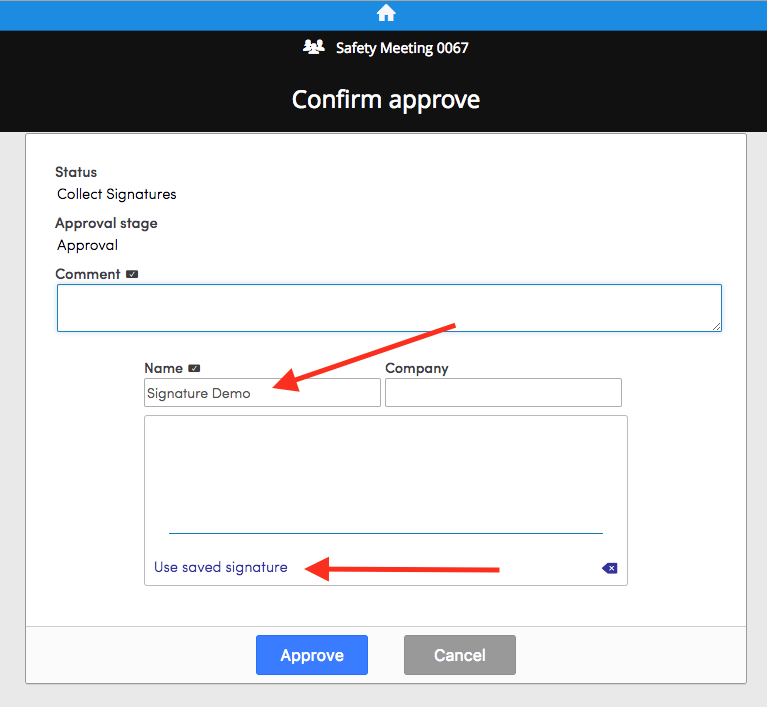 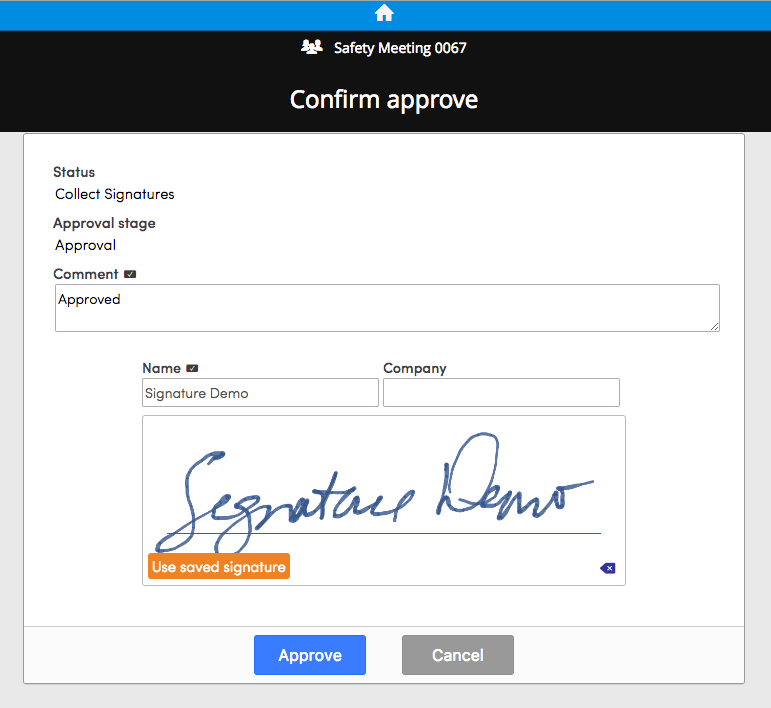 Signatures added to a form by an Approval are shown in the Approval box with the Result, and a date and time stamp. 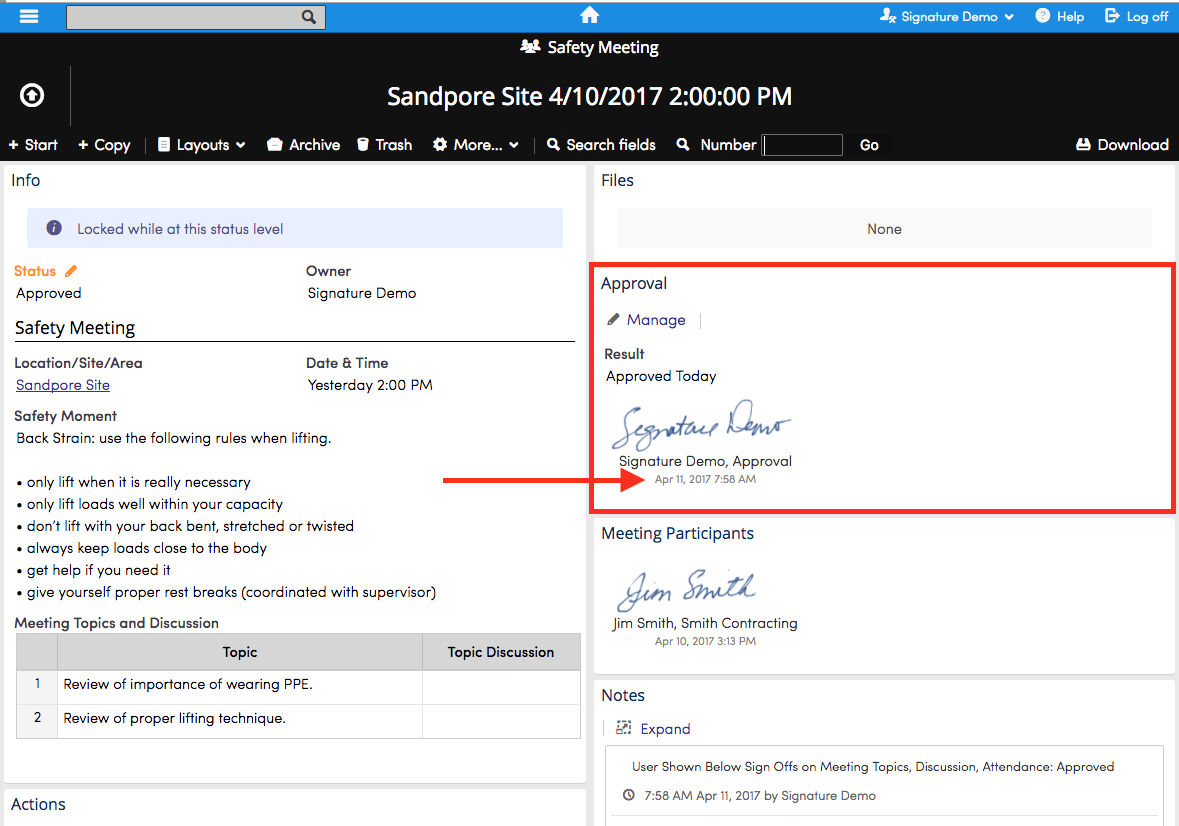 Signatures added via Approval can be considered as a secure electronic signature because:

Signatures can also be added to Layouts. Add Signatures from the Insert menu, then choose how you want them to appear. 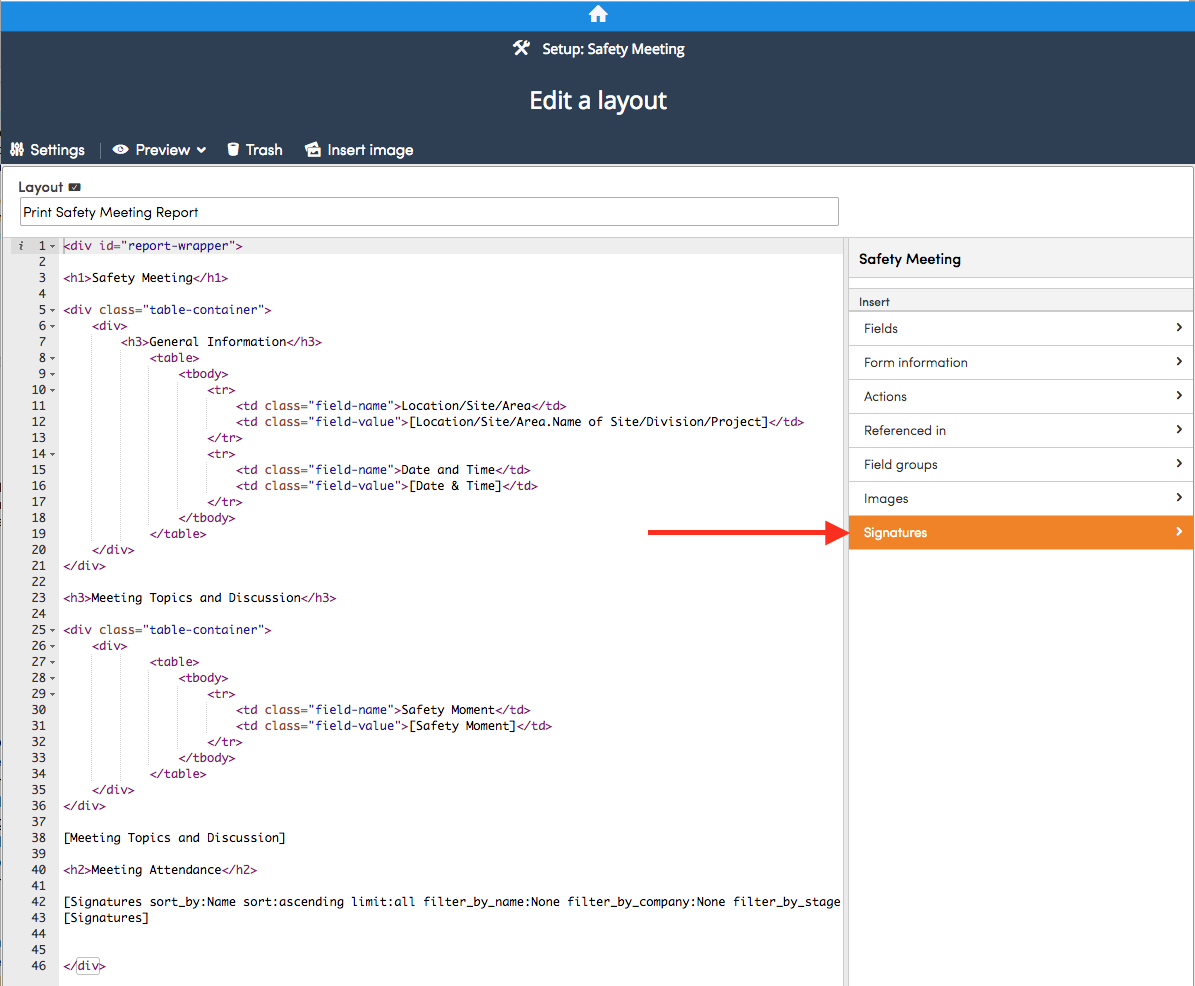 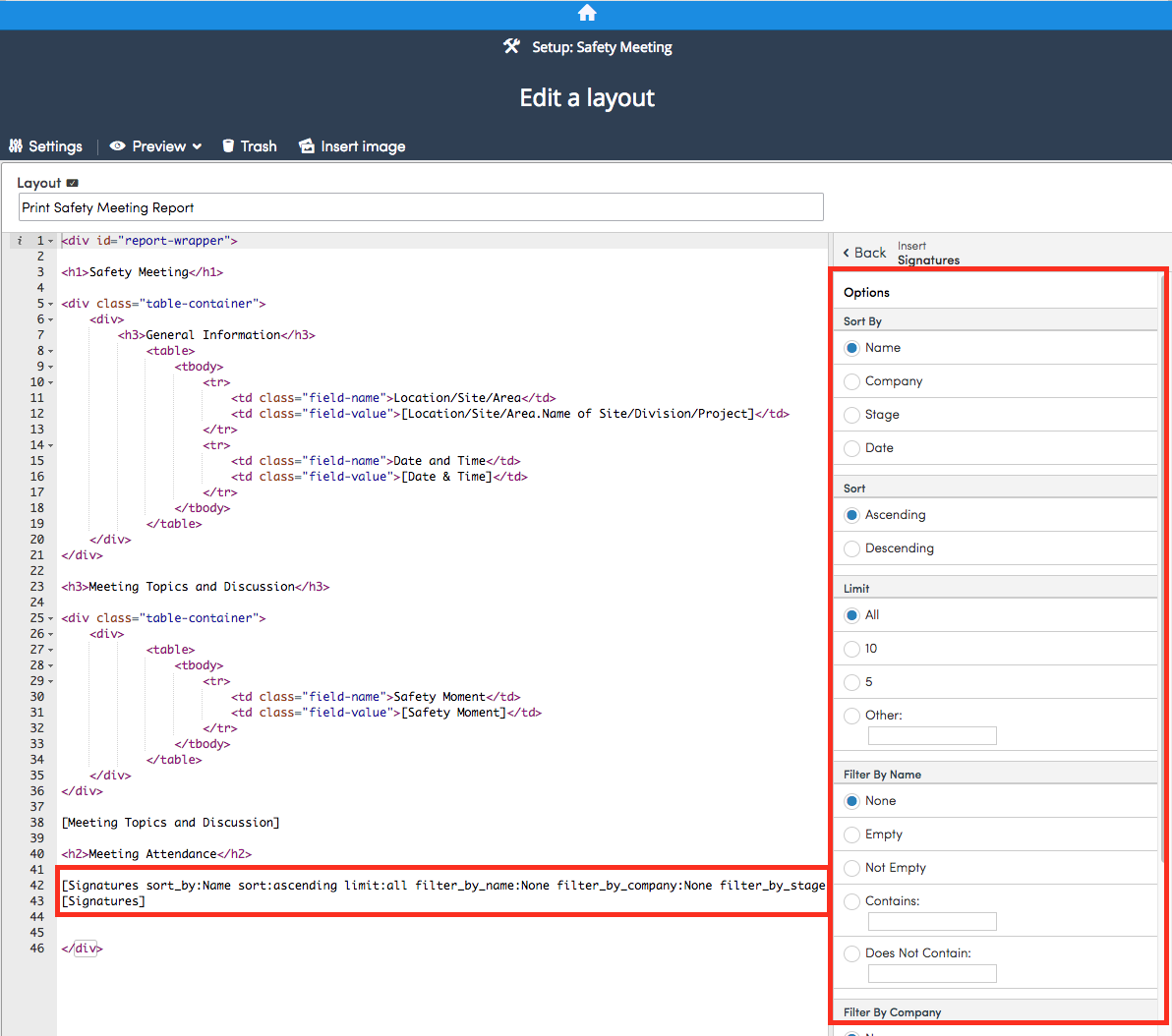 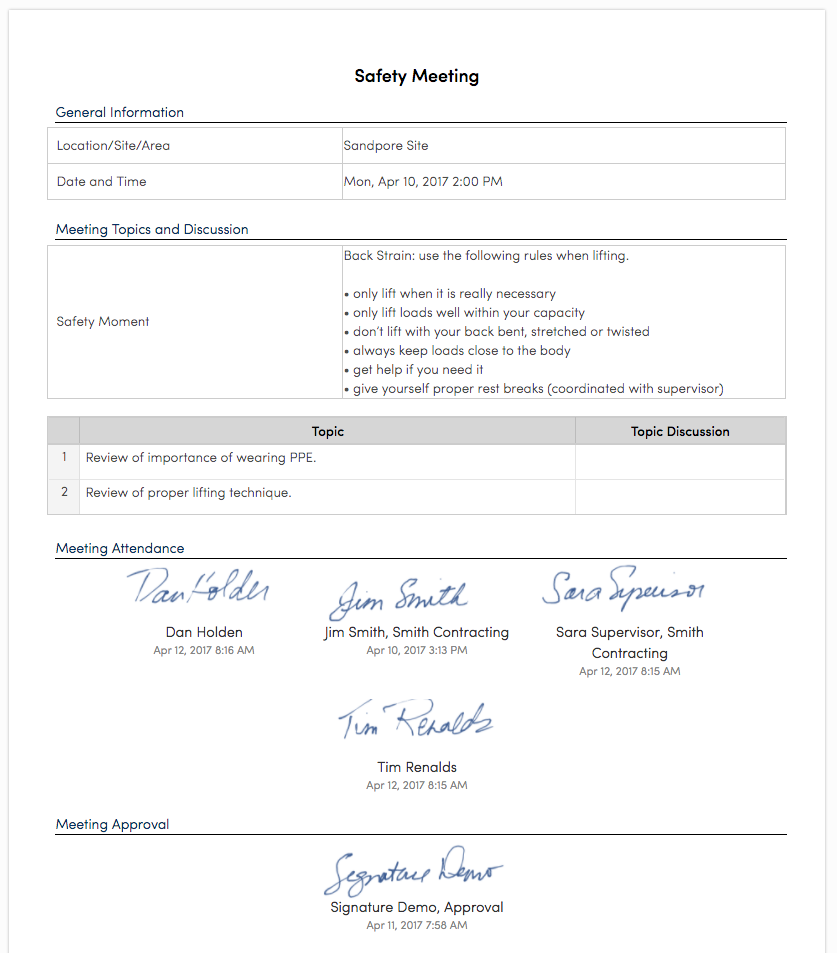 The following are internal process suggestions that will strengthen the legitimacy of signature collection:

Electronic signatures can also be collected using the offline app. When it is time to collect signatures, press Signatures. 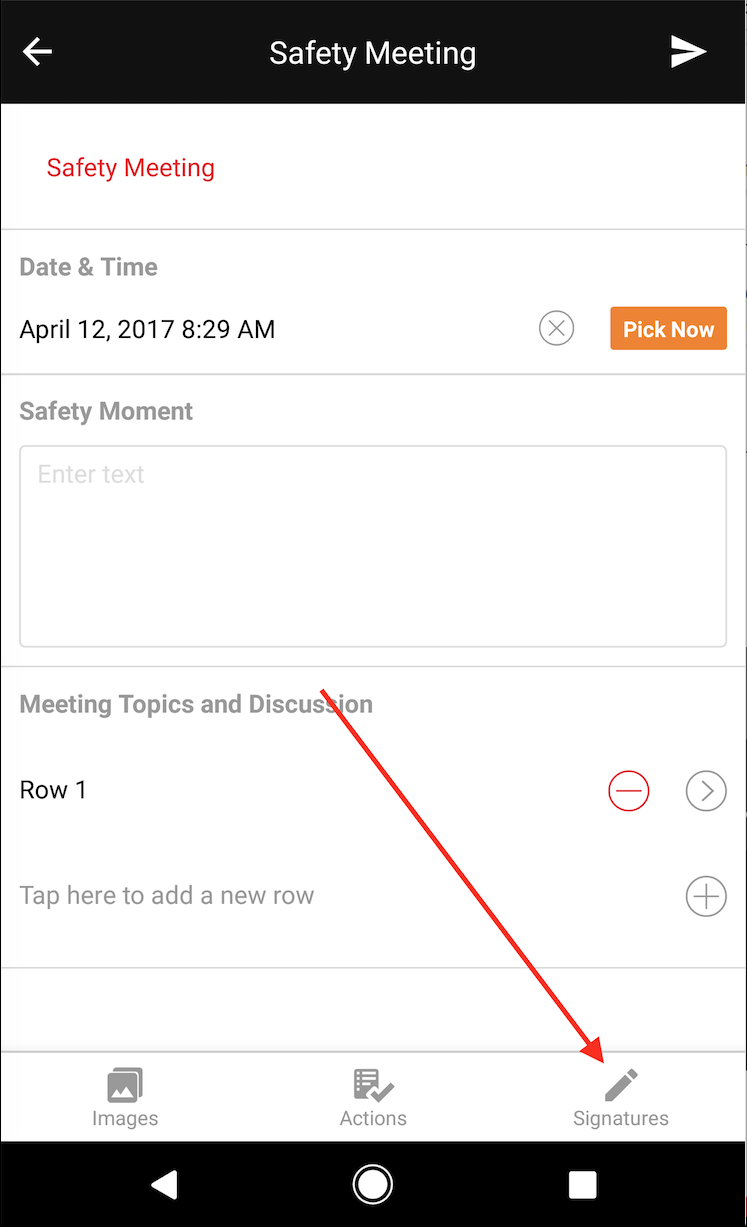 To add a signature press + 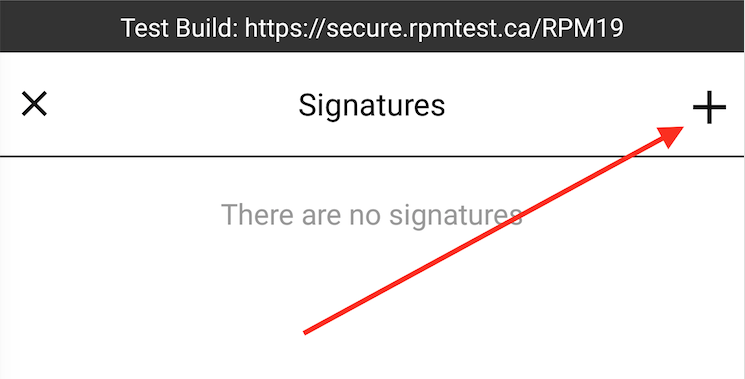 Add Name, Company (optional), and a Signature. When a person has added their signature they can press the arrow to get back to the signature page. 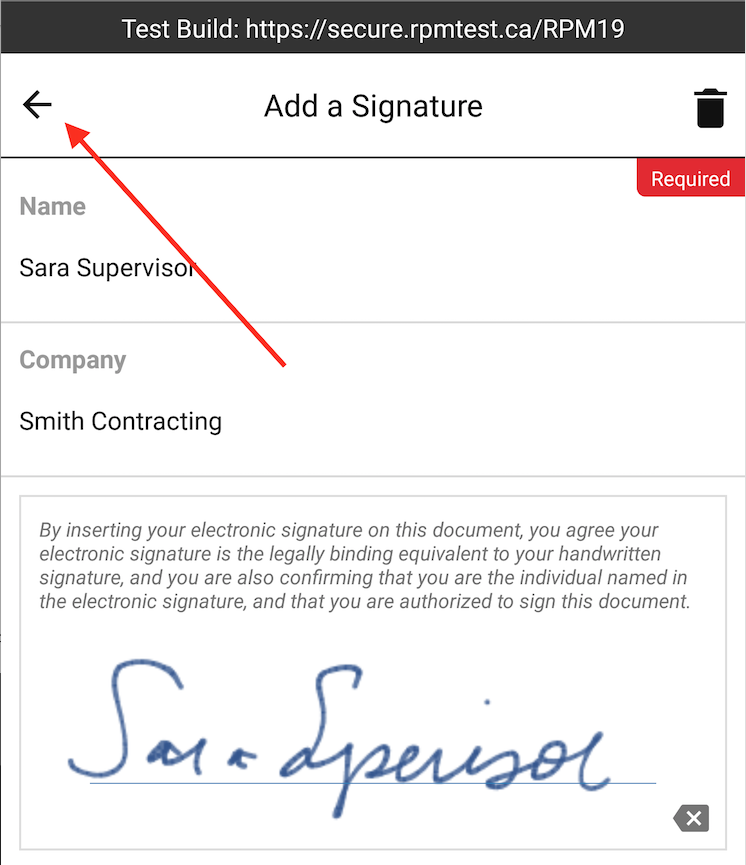 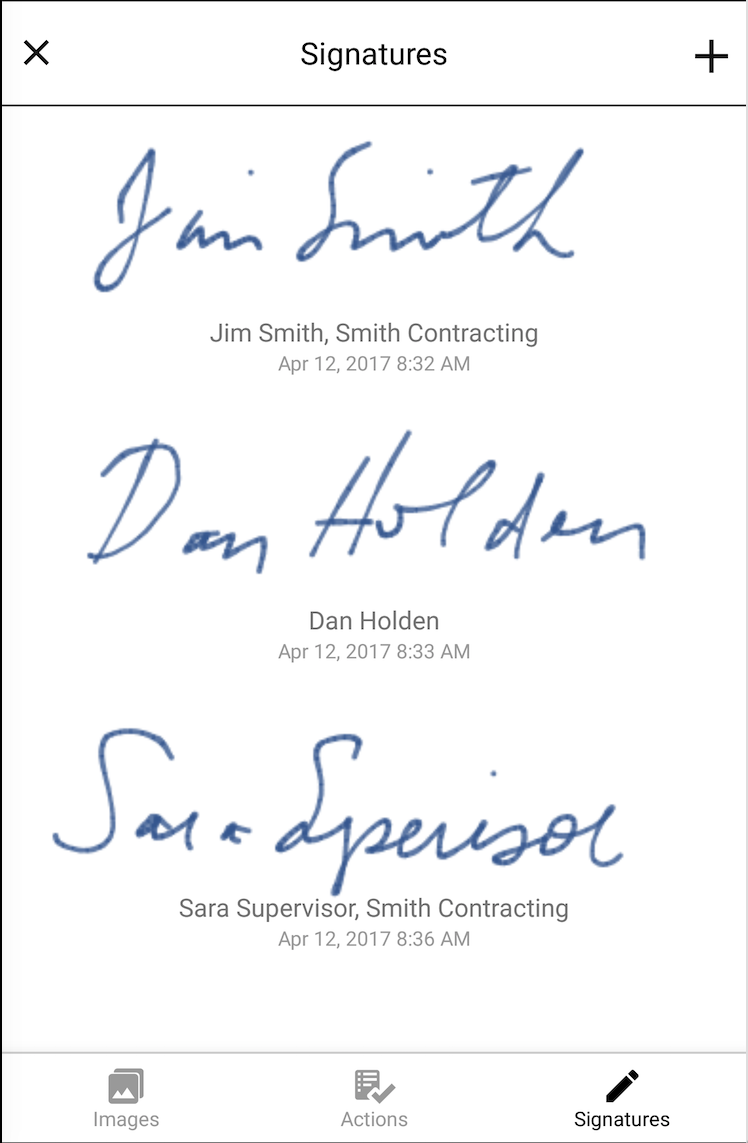 Approval functionality is not available on the app at this time. Approving forms will be required to be completed with an Internet connection through the website.